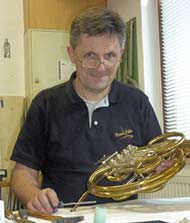 I am glad to have this opportunity to be able to write in detail about myself, my little workshop, and the history of Ricco Kühn Horns. “Meet Your Makers” is a fantastic idea that helps readers get to know the faces behind the great horns you see at exhibitions and on websites.

As is the case with every colleague, I have my own story about how I came to this beautiful craft. It was a spontaneous decision in a rather frustrating life situation! After it became clear that I wouldn’t be allowed to follow my originally chosen career path in the time of Communist East Germany, I had to decide on a course of study. Since I didn’t have a “better” idea, my parents figured this would be a good way to combine my musical and technical interests.

Furthermore, we had a long musical tradition in the family. My great-grandfather, grandfather, and father all played the trumpet in the local wind band. Thus I had no choice in the matter - I would learn the trumpet as well. To be honest, I wasn’t the most dedicated student. Indeed, my interest in technical things was growing, and I had way too many ideas (and therefore, no time to practice.)

I completed my “Metallblasinstrumentenbauer” (Brass Instrument Maker) training with B&S in Markneukirchen, in the company where Hans Hoyer horns were built. In the school, there were many photos and catalogs from the most varied sorts of horn models. Since double horns always look rather complicated to the eyes of a trumpet player, this naturally awoke my technical interest. Although I was only allowed during my studies to assemble valve sets for most instrument models, the desire to build horns was strong in me. Therefore, after my studies I went to Heinz Börner in Chemnitz, Oskar Reissmann’s successor. Oskar Reissmann had an excellent reputation up through the 1950’s as a horn builder, even well outside the borders of Germany. Heinz had a small, old workshop with very little in the way of machines and technical equipment. The horns were assembled manually under the simplest of conditions. For me, it was a very interesting time in which I was able to delve deeply into horn building. I also learned back then how to play the horn; indeed, I practiced more during this period than I did on the trumpet in my entire childhood. I was fascinated by everything about the horn! I played in various configurations, from chamber orchestra to brass ensemble, also traveled solo for a while and therefore got to know almost every situation that a horn player has to master.

During this time, I completed my Master’s Diploma. For my final project, I built a double horn, a “Reissmann” model with a stop valve. Heinz Börner’s horns of the time were models made exclusively to Oskar Reismann’s model. Besides a few Bb horns, there existed a compensating double, much like the Kruspe “Wendler” model, as well as the full double, similar to the Geyer/Knopf methods of construction. Heinz Börner discontinued the manufacture of Reissmann Wagner tuben. Unfortunately, I cannot prove exactly for how long Oskar Reissmann built double horns like this. All that we know for sure is that the company was founded in 1902, it had been based in Chemnitz since 1912, and that old photographs exist in which Oskar appeared with the double horn. Possibly, he was one of the first craftsmen ever to build horns in the famous Geyer or Knopf fashion.

The bells made at that time were somewhat wider cut, similar to the C.F. Schmidt models constructed at the time. It is not known whether both companies might have had the same bell supplier. For me, the Reissmann tradition is important because I had many new ideas about building on these grand experiences after completing my final Master’s project.

Shortly after my master’s diploma in 1986, I began the preparations for my own company. It was not easy to initiate an independent existence in the former socialist system, so I delayed this plan until the autumn of 1989. Before then, I had to serve in the Army, and afterwards, the procuring of tools and technology took some time. After I finally received official permission and was ready for everything, the fall of the Berlin wall and change in the political system happened. By this point, I had already made many contacts with horn players in the former DDR. My ideas were good, so the liftoff should be successful, I thought!

I shouldn’t regret it now, but for my business it was an unfortunate fact: the borders were once again open, Germany reunited soon afterwards, and so of course most of my customers were more interested in the renowned horn from Mainz than in my ideas. As a result, I was off to a bumpy start.

In the months immediately afterwards, I was constantly on the move, introducing my horns. During this time, I made the acquaintance of new suppliers in the western part of Germany. I had even more new ideas. Financially, it was a near catastrophe, but in this manner I was able to bring my horn models to a new standard in an extremely short period of time.

Perhaps fortune follows persistence? I got to know new business partners who opened a new market to me outside the German “problem zone.” Because of this, I never really had to make concessions to the German Alexander brass players, and until just two years ago, didn’t have an Alexander-compatible model on the program. Perhaps certain readers will wonder why I mention the name Alexander so openly. However, it is simply the reality of every German horn builder that a large portion of horn players are only interested in the horns from Mainz.  Throughout this situation, I have never blamed the Alexander Company. They are nice people, and the horns are good, as are their marketing and production processes. If there’s any issue to be taken here, it’s perhaps with the horn players who have never tried other horns and who therefore take away the chance for other dedicated manufacturers to thrive in the market. Luckily, the world is a big place, and times are changing! In the meantime, the German market has already become a significant proportion of our business.

Often at horn workshops, I’m asked if we see ourselves more as trumpet or horn builders. Many people have read about the trumpets on our website. I’d like to tell a story about this – this is no joke, it’s the truth. Most trumpet players know the tale:

Shortly after the beginning of the company, I had a colleague who, though diligent, wasn’t yet qualified enough to build horns. With him, “just for training purposes,” I built a few trumpets, and did the same with all subsequent colleagues. Besides, with trumpets I could quickly try out my new “toy” – a computer measuring system. Somehow these trumpets made their way into the right hands. Suddenly I had a huge demand for our trumpets, even though I had never advertised them.

In the years that followed, a few new models followed. We were able to sell many trumpets, won the “Deutsche Musikinstrumentenpreis” for our B-flat trumpets in 2010 and 2015, and in the meantime became one of the most sought-after trumpet manufacturers in Germany. Despite this – and most trumpet players are aware of it – my heart beats for horn building. We’re horn builders who also make trumpets, not the other way around!!!

The tight connection between horns and trumpets of the same level of craftsmanship in such a tiny workshop (we are only 6 people) is likely a little crazy. It’s also stressful sometimes to switch the mode of thinking from one order to the next. In spite of this, we surely wouldn’t be where we are without our experience with both instruments. Often we have tried to incorporate our experience with trumpets into crafting horns and vice versa. The acoustic rules are the same, just with different priorities. Thus I could get to know certain problems of orchestral horn players from the point of view of the trumpeters. As a result, I definitely have more insight about orchestral sound than someone who is only involved with people who play one instrument. I’ve also gathered experience regarding embouchure problems, physical condition, and various playing techniques, from both sides. I could go on and on about my favorite topic, “Attacks, resistance in conjunction with condition,” but I will briefly say that I’ve given a lot of thought about how to build an instrument that is “healthy” for the musician. By this I mean an embouchure-protecting, secure way of playing, an optimal projection into the hall – so that horn players can blow in a way that protects their chops – with the best possible ergonomics, nonetheless offering a lot of room for individual sound concepts.

For me, professional musicians are on a level with professional athletes who achieve great physical feats; in addition, they are creative artists and need to be able to practice their art up through an advanced age, should they so wish. We as manufacturers of this “sports equipment” need to take this responsibility seriously. The musicians trust us, and we shouldn’t disappoint them.

In conclusion, I’m happy to announce that after our son Florian is now working full time in our workshop, after having completed a long and rigorous course of study including brass instrument construction, economics, as well as his master’s exam (his final project, was, of course, a “Reissmann” double horn)! Florian is also a horn player and will certainly build many more beautiful horns in the future.

Thank you very much for your interest. Perhaps we will see each other at one of the upcoming IHS shows!
Ricco Kühn