A Life at La Scala, Milan 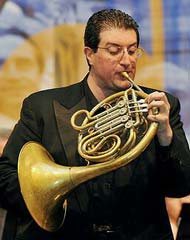 When I was invited by Kristina Mascher-Turner to write an article about myself and how the horn functions in theopera house, I was proud and honored.   I started studying the horn when I was seven, in the local band of my hometown. I was immediately facinated by the shape and then especially by the sound of the horn, which was warm, intense, andenveloping.

In the years before arriving at La Scala, thanks to my teachers, Domenico Sebastiano and Luciano Guiliani, I was introducedto playing in an orchestra, chamber music, and solo playing. I worked for several years with the Accademia Nazionale di Santa Ceciliain Rome, with the Maggio Musicale in Florence, and the Teatro Lirico of Cagliari. In 2000/2001   I won the international audition in LaScala in Milan. For nearly 17 years I have had the honor and privilege of playing in this great theater. A season in this theater presentsmany diverse opportunities to play under and be in touch with the most famous conductors. The daily routine is structured like othertheaters with rehearsals and performances, that is often a rehearsal in the morning or afternoon and a performance or ballet in the evening.

There are various types of programs such as Operas, Symphony concerts, and Ballets. One can taste and experience the differentopportunities this repetoire presents. My typical day is practicing, rehearsing, and performing. In La Scala we have the opportunityto play under such conductors as:  Muti, Abbado, Barenboim, Sawallish, Giergiev, Mehta, Termirkanov, Chailly, Luisi, Harding, Dudamel,Chung etc. The atmosphere from the moment a conductor steps on the podium for the first rehearsal of an opera, symphony or ballet isindiscribable. The greatness and comunication is often done with a gesture or a simple glance and is something unique.In this theater one has the opportunity to play in many different groups and chamber ensembles such as La Scala Brass, Ensemble Strumentale Scaligero, I Corni della Scala, I Cameristi della Scala, I Virtuosi della Scala, and Quintetto dell'Opera di Milano.

In conclusion, in an all around view of this lecture of the horn, I considered a career conducting, a soloist, and above all I founded a trio,Trio Morgen,  (www.triomorgen.eu) with which to expand my activities concerned with chamber music and lieder, in order to get the  broadest  view of the horn.