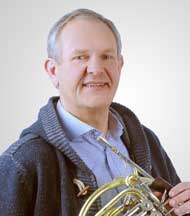 When I started playing the natural horn in 1970, musicians who played original instruments were extremely rare. In Vienna in the late 1950’s, Nikolaus Harnoncourt founded his group called “Concentus Musicus Wien.” They started with only strings, and he conducted the group from his cello chair. Harnoncourt had close contact with some Dutch musicians – Gustav Leonhardt, Frans Brüggen, and Anner Bijlsma. Frans Brüggen and Anner Bijlsma were teaching at the Koninklijk Conservatorium in The Hague, where I studied.

Together with Frans Vester, the flute player of the famous Danzi Woodwind Quintet, they inspired me to start playing on the natural horn. At the same time, I won a Dutch prize (“Prix d’Excellence”) that gave me the opportunity to make several recordings for Dutch radio. I was so inspired by the idea of playing natural horn that I proposed, after recording the Schumann Adagio and Allegro and the Dukas Villanelle, to play the Beethoven Sonata on natural horn next time. The only problem was that I had no instrument.

I started to study with Hermann Baumann in 1971 for the “Konzertexamen” in Essen, and he advised me to order a copy made by Meinl and Lauber in Geretsried near Munich. At the same time, I started to practice natural horn on my single Bb Alexander, which had an F crook at the thumb valve for the low notes. (Almost everybody played a single Bb horn back then in Holland, just as Dennis Brain, Peter Damm, and Alan Civil did in those days.)

Just in time before the recording, I received my Meinl and Lauber copy. It was a copy of a Huschauer, a Baroque instrument with a rather large bell. My colleagues in the Residentie Orchestra (my first full-time position) started laughing when they saw me with that natural horn. Everyone thought it was just a nice attempt that would end soon.

Baumann asked me to record with him for “Das alte Werk” from the label Telefunken Decca. We did several Bach cantatas, and we also recorded the Christmas Oratorium with the Regensburger Domspatzen for television. Baumann was so busy with his solo career that he could not do all the orchestra recordings. I remember the recording engineer once taking my horn because the high A (13th harmonic) was still too low with the hand out of the bell and the tuning slide in. He took a saw and made the entrance of the tuning slide shorter.

Soon afterwards, Gustav Leonhardt and Frans Brüggen asked me to record the first Brandenburg concerto on natural horn. Now I had another problem: there was no second horn – a good time to ask my friend, the first horn of the Amsterdam Philharmonic Orchestra, Jos Konings. We ordered two horns in Mainz made by Alexander. The Alexander natural horns back then were modern F horns without valves. The good copies came much later. Originals were not generally available – nobody cared when they found one in the attic. They were sure that it was worthless because it was so old. So Jos Konings and I made that recording on the two Alexanders. That was in 1976. Twenty years later, I did a new recording for Sony Classical with the period orchestra “Tafelmusik Toronto,” on a copy of a Baroque horn made by John Webb.

Adriaan van Woudenberg (solo horn of the Concertgebouw Orchestra) experimented with the Danzi quintet on original instruments, but people thought that either it was ridiculous or not interesting. We always had to hear about how Mozart, if given the choice between the valve horn and natural horn, he would have chosen the valve horn. What they forgot was that Mozart would have written other pieces for the valve horn as he did for the natural horn. The only way to come as close as possible to the composer’s intentions is to play the instrument he had in mind. Suddenly, you feel that the balance between instruments is so different than what you are accustomed to hearing. This makes it so important to learn to play the natural horn – it makes you so much wiser and better on the valve horn when you play pieces from the classical period.

In those days, of course, many people who weren’t good enough to get a job in a regular symphony orchestra started to play original instruments because only a few people were doing it. Also, because it is technically easier to play a Telemann violin concerto than a Paganini concerto, they could start more easily. Besides, nobody knew how well original instruments could be played, or even that it was possible to play in tune. They had a lot of excuses when they cracked notes or had bad intonation. Nowadays, the standard of musicians who play on period instruments is incredibly high. The public was so interested in hearing this new, fresh, phenomenal sound that they preferred these recordings to yet another version of the Beethoven symphonies with a standard symphony orchestra. More and more top-notch players started to play on period instruments.

In the horn world, we are seeing more and more players who play both valve horn and natural horn. Many orchestras nowadays expect their horn players to play the classical repertoire on period instruments. This is, in my opinion, a strange development. Why should only the trumpets and horns play on natural instruments, while the other players all play modern equipment? The balance is not represented in this way.

Of course, it is the composition that is the most important. I am not so fanatic as to play all classical pieces on the natural horn, but it is very important to learn from the period instruments and to understand better how to play your modern horn when you play classical or Baroque compositions. In my career, I did both. I played for 16 years in the Orchestra of the 18th Century (conducted by Frans Brüggen) and made many recordings with them. Also, with the Tafelmusik Toronto, I recorded many orchestral pieces as well as the Mozart horn concertos. At the same time, I played with the NDR Symphony Orchestra in Hamburg on my modern Paxman triple horn and did a lot of solo playing on both the valve and natural horn.

On several occasions, I played Mozart 2 on valve horn and Mozart 3 on natural horn, both in the same concert. I feel it is essential for the public to hear both instruments in one performance. Even though there is no competition between both instruments, it is interesting to let the public hear what kind of sound Mozart had in mind.

When I give master classes in countries all over the world, it is good to see horn students also playing natural horn at almost every music institution. In Europe, the USA, South America, Russia, China, Japan, and Korea – all the students are so inspired by the natural horn.

So much has changed in the last forty years.

You can find Ab Koster’s masterful natural horn recordings on his website: www.ab-koster.de.