A few words from a horn player from The (Arab) Gulf… 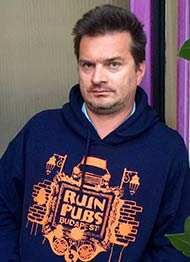 Everything started in 2007, on a typically wet and humid day, driving on the highway in Malaysia’s main city of Kuala Lumpur, when one of my Hungarian friends from the Malaysian Philharmonic Orchestra called me to say not to hesitate any longer, but rather send in my application for the principal horn job of the yet-to-be-founded Qatar Philharmonic Orchestra. (Qatar is a tiny peninsula in the Persian or Arab Gulf. It shares a land border with Saudi Arabia and sea borders with Bahrain and Iran. The population exceeds 2 million people (most of them foreigners from all over the world.)

I was more then keen to make a change in my life; frankly speaking, I’d had enough of Malaysia after spending ten years there. I reached the limits of my tolerance when it came to coping with the local lifestyle and culture. I felt I was trapped there. I’d had enough of the orchestra as well and wanted something different. I was looking for a place where I could find enthusiasm, affection, less of the lukewarm MPO performances. (Everything was so different in the first five years of the orchestra - it was a real treat to be part of it. We were often described as the best orchestra in Asia (excluding Australia ;->) We played magnificent concerts with various famous soloists and conductors, but the magic - at least for me - was reduced to four or five good concerts per year by the end of my ten years there.)

I aimed for Europe. I wanted to be European again, be a part of it. I missed my culture, history, the colors, the vibe. I had enough of the "stupidity" in general. I tried to avoid sinking in a society in which I didn’t belong. After three auditions in a row, I ended up winning another exotic principal job, this time in Qatar. Bye bye European dreams...

I will never forget the dirty room with the "honky-tonk" piano at the Cairo Hilton at my audition. It was impossible to tune to it. My tuning slide fell on the carpet playing half way through the intro of Strauss 1! I also remember that the jury asked at the end of my last excerpt: "What the hell do you want to do in Qatar? Do you know the place? Do you really want to live there?"

Well, I think I gave him rather positive answers, as a few months later I received a congratulating mail from the manager of the orchestra on my appointment for the first horn job.

Much to my surprise, I found out that my fourth horn Zsolt Peter from the MPO also got the fourth horn job. That chap has always been on my tail, following me into every job I’ve won so far. We started our professional career together back in 1992,both of us winning jobs in the Hungarian State Opera Orchestra. I also learned that in our new orchestra, four horn players out of six were also Hungarians. Conspiracy or not, we can’t blame it on anyone…. For the last four years we’ve managed to include another of our countrymen in the horn group. Laszlo Froeschl is the sub-principal second horn from the Hungarian State Opera Orchestra.

I’d like to take this opportunity to introduce the other players from our section: Attila Szucs (2nd/4th), Andras Chlebovics (3rd/1st), and the only non-Hungarian among us, Gideon Seidenberg (associate principal).

After a dodgy beginning, our rehearsals and concerts took place for two years in a ballroom near one of the landmarks of Doha, The Torch (next to Qatar’s then-biggest shopping mall.) Everything seemed to be difficult at the beginning. It took a long time to get a season plan and better venue, as well as to settle down satisfactorily in our new life.

When in Doha, forget about streets the way we know them, lovely people walking by, cafeterias and terraces. Social life is limited to hotel bars and restaurants where alcohol is served, or else where expats meet up for a football match.... It is unlike other parts of the world - people live in gated communities called compounds and use cars for commuting. Public transport is marginal and unreliable. Life is not actually very colorful, but after eight long years there are improvements compared to the beginning. You learn in Qatar how to maintain relationships and start to value the companionship of others too!

The local Arabs are very friendly and helpful, and I’ve only had positive personal encounters with them. Out on the sea or on the sand dunes in the desert, the elderly ones especially are ready to show you around. On the other hand, they still need to learn how to protect the environment - littering in public places and maniac driving with dangerous maneuvers never seem to go out of fashion. Tourists, newcomers, beware! Driving here is not for the faint-hearted!

We in the Qatar Philharmonic Orchestra have a luxurious lifestyle. We receive real benefits here, including quality education for our children and generous salaries with housing and airfare allowance, as is usually the case for expats in the Gulf region. We have concerts about three times a month from September to June-July, depending on the start of the holy month of Ramadan. Our orchestra consists of 23 different nationalities. Germans, Arabs, and Hungarians are the major ethnic groups. At the world-famous design award-winning Islamic Museum, we stage wildly successful chamber music concerts usually on Thursdays, and the entry is free of charge :-).... We in the QPO consider ourselves to be one of the most important cultural establishments in Qatar.

Our sponsor is the Qatar Foundation, created in 1995 by Sheika Mozah, the wife of the Emir of Qatar. It is an enormous educational and outreach project. Their aim is to provide the population of Qatar with the best universities and tutors mostly from North America, as well as to bring Western knowledge and culture into the country for the well being and benefit of the people of Qatar. They created Education City, a quarter within the capital, Doha. Quite a few U.S.-based universities can be found here, as well as a convention center, a venue we use for performing a few times a year to more than 2000 people.

Our headquarters at present is the Opera House in the West Bay district called Katara. It is a leisure and art centre with a huge public beach, art institutions, a music academy for Western and Arabic music, a Roman-style amphitheater, and restaurants, just to name a few of the highlights.

I, along with several colleagues of mine, settled down on a new artificial island called The Pearl and took up kite surfing, kayaking, and paddle boarding as hobbies. We often go down to the beach attached to our building or bicycle to another one for beach tennis or just for meeting up with others.

Also important to mention is the flexibility of our management. We work hand in hand to make orchestra members happy by granting them enough free time for outside gigs and performances in Qatar and overseas. This is essential to maintain the connection with the music world, fight isolation, and to recharge one’s "musical batteries".

It’s never easy to live away from home. But if you can accept other cultures and diversity, if you have the ability and strength to face challenges on a daily basis, if you’re not afraid of uncertainty: put down your Starbucks paper cup and jump into the unknown.