A Lifelong Dance with the Horn

“Music may not always feed my pocketbook. But it always feeds my soul” – a lifelong dance with the horn 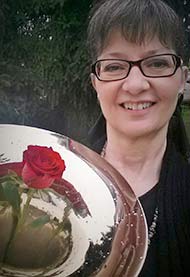 That's my usual quip when folks ask how long I've played the horn, because it wasn’t my original instrument of choice. I’d been a trumpet player, like both my parents and my grandfather, for 6 years when a horn was thrust upon me at the end of 7th grade.

But during junior year in high school, my passion for playing the horn burst forth due to an epiphany. For the first time, I saw a live performance of Tchaikovsky’s Fourth Symphony. That opening fanfare, that splendidly heroic timbre that I had known and loved from my parents’ vinyl record collection since I was two years old, was played by a section of HORNS! The very instrument I held in my hands had that power hidden somewhere inside, under layers of after beats, and I was going to find it…

From that very moment I knew the horn would be in my life forever.

As if winning an audition to play with the All-Northwest Band in Portland, Oregon - and hearing that Tchaikovsky from the All-Northwest Orchestra – wasn’t already exciting enough for a high school kid from Butte, Montana,there were more thrills to come that year. I’d also won a scholarship to the 4th International Horn Society Workshop in Bloomington, Indiana. And in June, I found myself surrounded for a week by 400 horn players from around the world. I was completely awestruck by the performances and coaching by legendary hornists. Memories of hearing Konzertstück for the first time played by the Chicago Symphony horns and our massed horn choir playing Hansel and Gretel still give me chills to this day. I joined IHS on the spot. It was as if fate wanted to make sure the horn would always be a part of me.

From then on, 44 years ago, my passion for the horn grew stronger with every twist and turn life brought me. I played, and soloed, with the Butte Symphony, where Mom, Dad, and I comprised over half the brass section. I owe my musical genes and a debt of gratitude for unwavering support to my parents and family. And I owe my initial musical foundation to five years of lessons with band director Ardith Palmerlee, a trumpet player herself. During high school, Mom drove me long distances to my first horn lessons with Terry Reynolds in Bozeman, who established my solid groundwork for horn playing. Later, I studied for a summer with Nancy Cochran Block, the horn professor at U of M in Missoula.

Destiny intervened again when it was time to select a major and a college. My lifelong plans to be a geologist, studying and growing crystals, was thwarted when the guidance counselor told me that the only jobs would be in the oilfields of Texas or Iran or on the oilrigs off the coast of Norway. Not what I had in mind at all, and as I looked at potential majors, I turned to K-12 Music Education, a degree that combined my love of music with pretty much a guarantee of a job anywhere in Montana, and likely one in Butte. Music andacademic scholarships would cover the majority of my tuition at Montana State, where I also was able to play with the Bozeman symphony and study for a year or so with another Farkas student, the incomparable Jane Aspnes. I learned about the horn, music and important life lessons from her.

My studies opened the door to two summers working at the Many Glacier Hotel in Glacier National Park, world famous for the musicians from every state of the U.S. who run the hotel during the day and performed at night. Those summers led to an invitation to tour and solo with the Duke University Wind Symphony during their 1975 European Tour while also studying at the Vienna Music Center for one semester in my junior year. It was an incredible opportunity and provided the chance to study with Friedrich Gabler of the Vienna Volksopera and Vienna Philharmonic. And the time to attend Vienna Opera, Vienna Philharmonic and Vienna Symphony performances. What a life-changing experience for a kid from Montana!

But after graduation, that guarantee of a job in Montana didn't help me when a four-year marriage led to two years in Nashville, Tennessee, for his MBA at Vanderbilt. There wasn’t one music-teaching job open in the entire state while we were there and I found work at an employment agency. When job offers came in after graduation, I pushed for a move to Seattle, Washington, to be near an aunt and closer to my family. Unfortunately, Washington was one of the few states that didn’t have reciprocity with Montana for teaching certificates. So I worked for two years managing a temporary help agency while I established residency to help make the required 5th year of college more affordable in order to teach.

But with a recession, I found myself, in short succession, without a job, unexpectedly single, about to lose house and home, no chance to attend school, and reeling from the news that my mother in Montana had been diagnosed with terminal cancer.

I knew I would need music back in my life to survive this storm.  This time fate smiled upon me with a lifeboat sent by Frances Walton (an iconic Seattle musician, as I would discover later), who offered me the opportunity to play co-principal horn with the Thalia Symphony in 1982. After a year or two there, I entered the 1984 Puget Sound Concerto Competition, and won a solo performance with them. As it turned out, Seattle was a good place to land with a variety of small paid gig opportunities with more than 30 volunteer community symphonies. I'm fortunate to have performed with many of them over the years.

I started a job that became a career in commercial property management and acquisition. It tried to consume my life 24/7, but I always made time for my orchestras and for season tickets for the Seattle Symphony, Seattle Opera and Pacific Northwest Ballet. Untold cultural riches for someone from a Montana mining community.

After two years with Thalia, I won an audition to join Orchestra Seattle where I had done some subbing. It was known then as the Broadway symphony, and I was one of the founding members of the Broadway Horn Club that continues to this day.

After 20 years in commercial property management, I left the field. The irony of a being horn player in a career that spent a lot of time dealing with plumbing issues and leaky pipes was not lost on me. For me, it was not a labor of love, but it did bring me an introduction to my husband - the love of my life.

With more time available to play with orchestras besides OS, I spent a year with Rainier Symphony while someone was out on leave. The next year in 2002, I was invited to join Philharmonia Northwest (formerly Thalia Chamber Symphony) where I had been subbing for many years. Just last month, I had the honor and pleasure of playing again with Frances Walton, who gave me my musical start in Seattle, as she conducted the 40th Anniversary Concert for Phil NW, the orchestra she started! And in 2003, I joined Lake Union Civic Orchestra (LUCO) and the Puget Sound Christmas Revels, my annual "Tights and Tunic" paid gig with Seattle Brass.

Over the years, I've compiled a list of nearly 300 horn players, most in the northwest, and started a Horn News e-mail to try to get horn-related information to folks who weren't members of IHS or our regional Northwest Horn Society.

I've been a featured artist with all three of my orchestras, and my concerts have been broadcast on radio and TV, and a few CD's and film scores. I've served on conductor search panels and personnel committees and have politely declined offers to serve on the boards of all my orchestras to try to preserve more time for playing music itself. I've handled the administrative duties of being principal horn, written concert preview e-mails and posted Facebook notices for marketing. I’ve designed and handcrafted jewelry and cards for orchestra fundraising auctions.   And I’ve spent countless hours stuck in Seattle's gridlocked traffic.  I practically have to wear a nametag so my husband knows who I am when I eventually get home!

Music was very much the majority of my lifestyle, but in 2004, music took on a new role when I was diagnosed with cancer. It now became my lifeline. With the support of my husband, family, and musician and conductor friends, music helped drag me out of bed and pushed me out the door to rehearsals and concerts 3 or 4 nights every week. I’m now in remission and I am very fortunate indeed to be here.

A few years later, just when things were getting back on track, I was sidelined in 2008 with a serious case of lockjaw. I could barely open my mouth and couldn't chew. It was difficult to talk too much and I was in excruciating pain for months. The disappointing diagnosis was TMJ disorder.

The new season was starting and the specialist dentist wouldn't allow me to play horn for at least a month. "Just go home and relax," he said, visit after visit. It was a dark time - I didn’t know if I would ever play the horn again.   After seeing a number of specialists and trying multiple therapies, I’ve learned to live with orthotic splints 24/7. I retrained my embouchure so I could play horn while wearing the lower day splint. And, once again, with the support of my family and orchestras, music became a lifesaver as I was able to join the final concerts of the season. The TMJ, while improved under continuing treatments, still stubbornly persists. As do I. And I’m grateful for every concert I get to play.

My life is filled with the support of my family and friends, but there’s a special spark from my passion for music and the horn. Music has blessed me a special family of friends. The horn that started as an instrument I didn’t want to play has become my lifestyle, my lifeboat, my lifesaver. It’s become my life.

So when folks continue to ask, “How long have you played the horn?” it makes me inclined to hope: