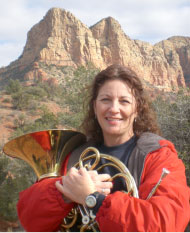 As an amateur musician, I often play my horn for fun and have many unique opportunities to play with a variety of groups. I have been living in Bonn, Germany for 8 years and have had many opportunities to travel with a few different orchestras to places like China, France, Ireland, Austria and Germany.

I would like to talk to you about my experiences playing with the Rainbow Symphony of Cologne in Cologne Germany. I was asked to play with the RSC because they needed a few more horns, and a friend of mine asked if I would be interested. I said..."I'm not gay." She said that they are also a gay friendly orchestra, so if you support the gay community in any way, you should play. I have many friends in America that are gay and have always felt very comfortable around them - so I figured why not.

The RSC has about 35 members. They play just a few times a year in which they get together and have a rehearsal weekend and play a concert. We have members from all over Europe. Our percussionist brings her own timpani all the way from Basel, Switzerland. The Harp player comes from Paris, and we have a few string players from other parts of Germany as well.

Two years ago, the orchestra was invited to Dublin, Ireland, to play as the orchestra for the Various Voices Festival. This was a festival where many gay and lesbian choir groups came from all over the world to perform. The festival was quite a positive experience and lots of fun. It was also a great time to build solid relationships with my fellow musicians. They are truly a wonderful group of people - many of them are also fabulous musicians. Several of the pieces we played were written especially for the Various Voices Festival. We also featured pieces from gay or women composers. Amy Beach wrote a fabulous symphony, the Gaelic Symphony, and we played the slow movement from that work.

After coming back from Ireland, I was so inspired I considered being part of the orchestra committee. I had so many ideas on how to make the orchestra stronger and do some more interesting things with the group. I am now the Vice President of the RSC and my past skills are useful for ideas, bringing the musicians closer as friends.

My biggest challenge is recruiting for the orchestra. Amateur musicians usually have full time jobs, making it difficult to find time to practice, but they do find time to attend our rehearsal weekends. We play mostly salon music and overtures, no large pieces, because we just don't have the people or the time to rehearse a large work. 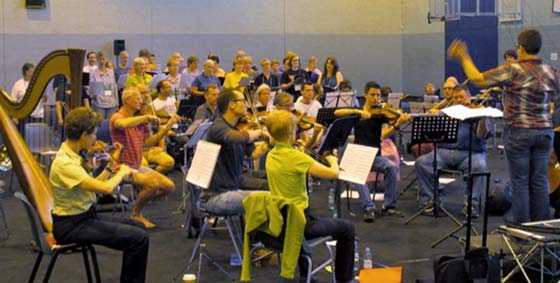 The RSC was originally conceived for the Gay Games, which was held in Cologne in 2007.  For this event the organizers needed some music for the opening ceremonies, and thus the orchestra formed. Since then we also play for similar events such as the opening ceremonies for Gay Pride in Cologne. The RSC is a relatively small orchestra, but the members are very special in my opinion. I play in 3 other orchestras here in Germany, but only the RSC has been truly accepting of me as an American and as an English speaker. They are all highly educated, and they are open and willing to speak English with me. They really have tried to get to know who I am. I think there’s an obvious reason for this - because they are different and have struggled for acceptance in society, it has made them more accepting of others. I feel very comfortable with this group of people and am very proud to be on the orchestra committee to help the community see how special they are. It is their charm and loving personalities that make them a very unique group of people. They inspire me to be a better person and to be more tolerant of all types of people. It can be challenging to recruit for this orchestra, mostly because so many people do not want others to think that they are gay.  We do have several other people who play with us that are not gay, but gay friendly. I hope that someday the world will lose the titles of “gay” or “lesbian” or “transgender,” and just be accepting of each other as human beings and help humanity evolve past all the stigma. After all, music is the universal language and brings us all together as musicians and our passion for music.

Playing horn has saved my life more than once and has brought so many great people into my life. I consider myself truly blessed to be a part of the magical world of music.