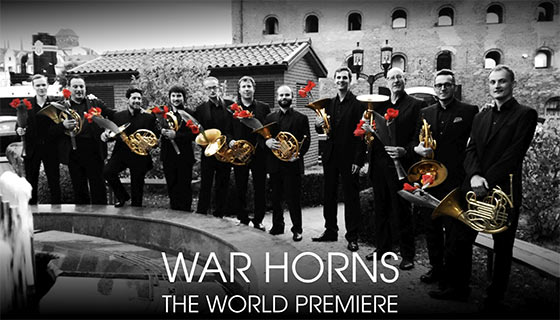 The world premiere of the piece took place in Gdansk (Poland), a symbol city where 76 years ago World War II started. In the city where the "Solidarity" movement was born, symbolizing the ideas of freedom and peace, today manifested by artists from various countries of the world. During the celebration of the 70th anniversary of the end of World War II - the most tragic armed conflict in the world. There was full audience - 880 people.

About the WAR HORNS piece:

War is always hunting... for human.
The WAR HORNS is a tribute to the victims of all wars.

A sculpture installation made by an artist Pawel Stepien was exhibited in the foyer of the Polish Baltic Philharmonic at the world premiere of the piece, on 23 August 2015. The installation is an integral part of the piece War Horns and it has been developed according to Pawel Pudlo concept.

PAWEL PUDLO
Composer, creative director and music producer. He creates his own artistic projects and composes music for exclusive commissions. Films and commercials with his music had been played in Poland, Germany, the Czech Republic, Israel, Estonia, France and Spain. UEFA commissioned a orchestral-choral piece for the EURO 2012. It was played during pre-match ceremonies in Poland and Ukraine. The music was listened on stadiums by over 1,500,000 people and broadcasted all over the world. He composed music for the opening ceremony of ITB Berlin 2011 Trade Show - the World´s leading travel trade show. Pudlo is the composer and the producer of VIOLEMI - THE SLAVE OF DELUSION (fantasy cinematic opera).www.PawelPudlo.com