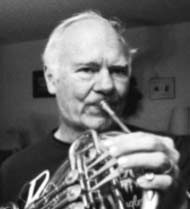 The names “Tom Greer” and “Moosewood” are sometimes linked together, sometimes not! Moosewood Mouthpieces have been in circulation since 1990, when Tom and his wife Susie McCrea returned to the United States from orchestral positions overseas.

The first mouthpieces crafted by Tom were made while he was with the San Diego Symphony. Trial and error resulted in MANY mouthpiece “attempts” being scrapped. One of those NOT tossed, a freehand Dell’Osa-pattern #3 bore, remained in Jerry Folsom’s Kruspe for the rest of his career. The Moosewood JF3 was the first professionally-dedicated mouthpiece Tom created.  Factors considered were Jerry’s tone color, his physical attributes and that it was to complement a Kruspe.  Jerry’s intense and very musical style made this horn/mouthpiece pairing a considerable success.

As there were no “mouthpiece-crafting academies” it was vital to learn the elements of machining. Tom set to the task on a Navy surplus Atlas/Craftsman lathe. Through the famous “Atlas Craftsman Manual of Lathe Operation” and a subscription to “The Home Shop Machinist” he discovered the meaning of “autodidact”.  Tooling for mouthpiece production is not available through machine supply houses. These pieces, tapered reamers, shaped cutters and cup contour tools, have to be custom-made. Tom taught himself how to machine steel tools, as in the 1800s, hardening them for use. He set up a hibachi with a forced-air “bellows” (hair dryer), bringing the metal up to correct temperature, hardening them through oil or water quenching. These same tools, some cut to reproduce older Geyer and Chambers contours, are still in daily use after 25 years. The backbore tools were made in the same way, and are still sharp and hard. Template patterns for more than 300 personal rim contours were collected over time; these patterns can enable hand reproduction, though it takes a lot of care.

Trying out ones creations “on the job” is definitely a plus, whether the musician is shaving bassoon reeds or rim surfaces!  This was brought home to Tom as he played more than 2600 two-hour performances of “Jubilee” in Las Vegas. “Jubilee” is still running after more than 40 years on the Strip.  Tom wore out a bell and set of 8D valve springs, drank approximately 256 Dr. Peppers, and read most of his personal library during his years in “Jubilee”.

Tom’s outstanding Las Vegas horn-partner, Kurt Snyder (California), could recount the same incredible tales!  Kurt contributed to Tom’s understanding of what would work & what was perhaps “so-so” in mouthpiece design. Kurt still uses his well-worn, unmarked Moosewood. Moosewoods have circled the globe since 1990. From Washington to Florida, Oslo to Tokyo, Tom’s hand-made mouthpieces continue to instill confidence, courage and enthusiasm.