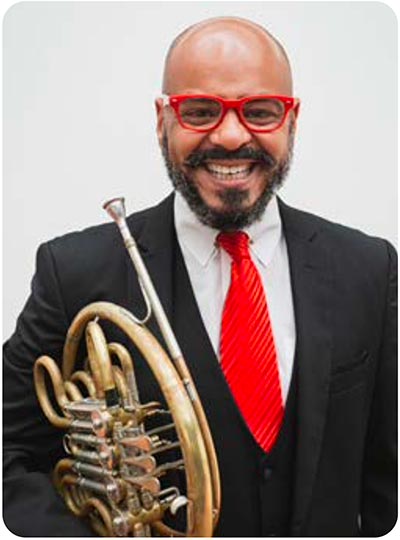 Israel Oliveira is an influential horn player in Brazil. He has been first horn of the Orquestra Sinfônica de Porto Alegre (OSPA) since 2004.

Israel was a student of Ozéas Arantes at the Municipal School of Music in São Paulo. In 1991, he won the Young Soloists contest at the Universidade Livre de Música and soloed with the São Paulo Youth Symphonic Band.

He has been a member of the São Paulo Symphony, the São Paulo Symphonic Band, the Experimental de Repertório, the Santo André, Ribeirão Preto, Santos and USP Symphonics, the São Bernardo do Campo Philharmonic, and the USP Chamber Orchestra. He has participated in festivals in Poços de Caldas, Itu, Campos do Jordão, and Pelotas, and taught classes in Itanhaém, Belém do Pará, Montevideo, UFRN (Federal University of Rio Grande do Norte).

Israel is an active chamber musician, performing with the Quinteto Metal Mania, Quinteto Porto Alegre, and the faculty wind quintet at the OSPA Conservatory. A passionate organizer of horn-related groups, Israel founded the Confrasulhorns (Confraria de Horn players of Rio Grande do Sul), which encourages and mentors young horn players throughout the state of Rio Grande do Sul. He is also the founder and general coordinator of LatinoAmericaHorns, a group of Latin American horn players united by their love of the horn.

Israel was honored with the Punto Award in 2021.