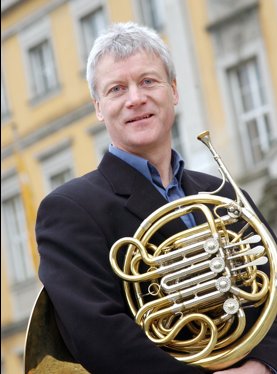 Frank Lloyd is renowned for his technical virtuosity, his musicality, and his willingness to share his expertise. Among many memorable performances at IHS symposiums are Paganini Caprices (with David Pyatt) at Tallahassee in 1993, the Britten Serenade at Tuscaloosa in 2005, and the Bach Toccata and Fugue in D minor at several symposiums (2006-2008).

Frank was born in Cornwall in 1952 and began his musical career on the trombone in his school brass band at the age of 13. At 16, he left school to join the Royal Marine Band Service and was subsequently changed to the horn.

On leaving the Royal Marines in 1975, Frank went to study with Ifor James at the Royal Academy of Music in London. Soon after starting, however, he was offered the post of principal horn with the Scottish National Orchestra (now The Royal Scottish Orchestra), where he remained until 1979. He returned to London to take up a post with the Royal Philharmonic Orchestra, and soon after that became a member of the Philip Jones Brass Ensemble, the Nash Ensemble, and the English Chamber Orchestra.

Frank has been on the faculty of the Guildhall School of Music, Trinity School of Music, Royal Northern College of Music and, since 1998, Professor for Horn at the Folkwang Hochschule in Essen, Germany, following in the footsteps of the legendary Herman Baumann after Baumann's early retirement. He has toured the world as a soloist, chamber musician, and clinician and has recorded much of the horn solo and chamber literature.

For more information on Frank's life and career, see his website .