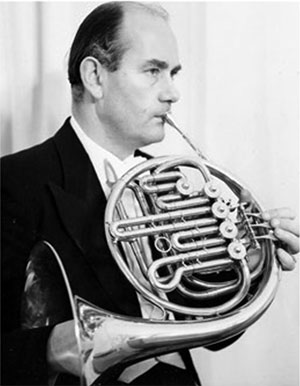 John Harold Burden played in the London Symphony Orchestra (1946-1955), joined the Sinfonia of London (1955-1958), was a member of the Virtuoso Ensemble of London, founded the London Horn Trio, and was principal horn of the Menuhin Festival Orchestra, but he is also known for his association with the Beatles.

John’s father, a priest in London’s East End, wanted him to take holy orders, but John was more interested in music. He took up the horn at age 16 and won a place at the Royal Academy of Music two years later. His teacher at the RAM was Aubrey Brain, and Dennis, born the same year as John, was a fellow student. When World War II broke out, both joined the RAF Central Band. In 1953, they performed together in the orchestra assembled for the Coronation in Westminster Abbey, Dennis on first and John on second.

Management of the London Symphony Orchestra insisted on remaining solely a concert and recording orchestra, but a group of players, including John, resigned en masse, most joining the Sinfonia of London to record for films. John played on the soundtracks of many movies, including The Ladykillers, Hitchcock’s Vertigo, early James Bond films, and the Pink Panther franchise.

The London Horn Trio, founded in 1959 with violinist Lionel Bentley and pianist Celia Arieli, performed over the next twenty years. John also made a number of appearances with Dizzy Gillespie when his band toured Britain in the late 1960s.

EMI producer George Martin approached John in 1967 to play on the Beatles’ album Sgt Pepper’s Lonely Hearts Club Band along with hornists James W. Buck, Neil Sanders, and Tony Randall. “They didn’t really know what they wanted,” John later recalled. “I wrote out phrases based on what Paul McCartney was humming to us.” John can be heard on the album’s title track.

John’s daunting workload took its toll, and by 1979 his embouchure had been permanently affected. He retired from playing and became a professor at Trinity College of Music until 1998, then taught at Ballymena Academy from 1990 until his retirement in 2005.

Information for this biography came from John Burden’s son, Tim Burden, is his tribute, John Burden: Legendary Horn Blower. An obituary in The Times was written by Mark Walker, son of Gordon Walker, a flutist and friend of John Burden’s.