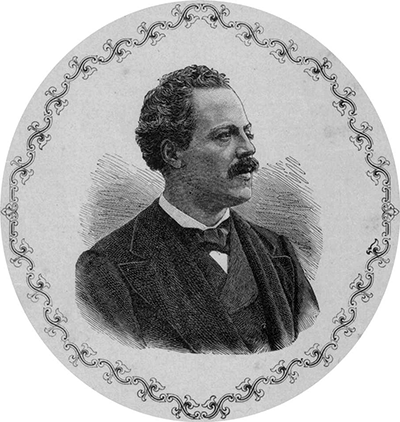 Beyond duties as solo hornist and educator, Henri Kling was a composer, conductor, organist, and writer whose publications still occupy considerable shelf space in our libraries. His reputation however has diminished to the point that few know who he was or what we owe him, and the current online edition of the prestigious Die Musik in Geschichte und Gegenwart has deleted his entry entirely.

Henri Adrien Louis Kling was born in Paris in 1842 to French native Claudette and Ludwig Christoph Kling, who hailed from the southwest German Grand Duchy of Baden. The Klings’ Paris sojourn presumably did not provide adequate employment for Ludwig, an Hautboist (military musician). In 1844 the family left Paris for Ludwig’s hometown of Carlsruhe, where he found employment in the wind bands associated with the local military garrison. Soon after the move, Henri’s mother died. Ludwig remarried, but he was a problematic father, and a devastating fire and political and military upheaval made for a difficult childhood for Henri.

Henri blossomed as musician in his teens, applying himself to violin, piano, and organ and being influenced by Eduard Devrient (manager of the court theater) and Carlsruhe Music Director Josef Strauss. The horn section of the Carlsruhe Court Orchestra enjoyed a fine reputation, and Henri studied with members of the section, including solo hornist Jacob Dorn. Students of orchestra members had free access to performances, which comprised more than two dozen operas in one season. Members of the section also gave advice on instruments; for Henri an initial cor solo (natural horn) was followed by a clockspring rotary-valve F horn built by Friedrich Wilhelm Schuster, one of the earliest makers of instruments with valves.

Henri left Carlsruhe in 1861, after the death of his father, settling in Geneva, Switzerland. He soon won the solo horn post in the Geneva Theater Orchestra, married in 1865, and had three children. His Méthode pour le Cor appeared in manuscript in 1865; it was printed in 1879 by Breitkopf & Härtel and a second, expanded edition was published in 1895 and remains in print today. Kling was elected Professor of Musical Theory and Horn Playing at the Geneva Conservatoire in 1866 and remained at the post for more than fifty years.

Geneva’s Grand Théâtre was opened in 1879, providing a venue for many opera and symphony concerts with Kling as solo horn with a brilliant reputation. At the same time, he began to develop as a conductor and was also famous for his teaching and adjudicator of band contests. Over his lifetime, he composed more than 550 pieces with opus numbers and many more without, including a concerto and sonata for horn as well as shorter solos, etudes, and ensemble works. His compositions were published by established publishers in Germany, Switzerland, France, England, Belgium, the Netherlands, Italy, and the US.

After two decades as solo hornist in Geneva, Kling resigned from the orchestra to devote himself to composition, writing, and teaching. He considered teaching at the Geneva Conservatoire his primary responsibility. He taught both hand horn and modern valve horn and stressed the importance of the hand in the bell. Among his many solo horn pieces, etudes, arrangements, and editions, Kling was the first to provide piano transcriptions for the Mozart concerti and the Weber Concertino. Compositions were dedicated to colleagues Alphonse Stenebruggen in Strasbourg, Henri Dubois in Brussels, and Friedrich Gumpert in Leipzig. Articles and books included topics such as the intersection of music and literature, contributions of women in music, local music history, and methods for composition, orchestration, conducting, and transposition.

World War I meant a blockade of Switzerland with attendant shortages and the personal tragedy of the war between his mother’s France and his father’s Germany. Kling’s fifty years at the Conservatoire was celebrated in 1916. He still hiked every Sunday morning more than 10 kilometers round trip to play the organ, donating his time and talents without pay. Kling died in Geneva at the age of 76 in May 1918, not living to see the end of the war.

Summary by Marilyn Bone Kloss of William Melton’s “Henri Kling: A European Musician." The complete article was first published in La Revue du Corniste, the journal of the Association Française du Cor, and then in The Horn Call, in the February, May, and October 2018 issues.