What initially struck me about IHSLA was the superb organisation of our hosts Annie Bosler and Andrew Bain – the efficient staff, the Colburn School and the many varied and superb venues, the detailed and comprehensive schedule of events and the impressive line-up of featured artists. That was just for starters. As a “seasoned professional” and many times a featured artist myself, I have experienced both unsuccessful and successful Symposia over the years and was therefore both interested and excited in the build-up to IHSLA. An added interesting to me was how this event would impress my 14-year old step-daughter – who, although coming from a musical family on both sides, was at her very first Horn Symposium. On speaking with her about the week, she said that what delighted her most was watching and hearing the great players, then meeting them afterwards – the people, like Andrew Bain and Sarah Willis, whom she had seen on the TV and were here in person – and then amongst us chatting and having a laugh. The Berlin Phil horns was especially interesting for her coming from Germany and having a father who plays principal double bass in the Essen Philharmonic. Los Angeles was a wonderful venue and held many more attractions that just the IHS Horn Symposium – which for a 14-year old, having first-hand knowledge of how much of the world of film and TV come from this part of the world was an added bonus and one that fulfilled all expectations. LA 2015 will be one Symposium my family and I will not forget in an hurry and my thanks and due respect go to primarily Annie Bosler, with Andrew and the team behind her who worked together in making this event such a resounding success – congratulations to you all.
Cheers,
Frank Lloyd 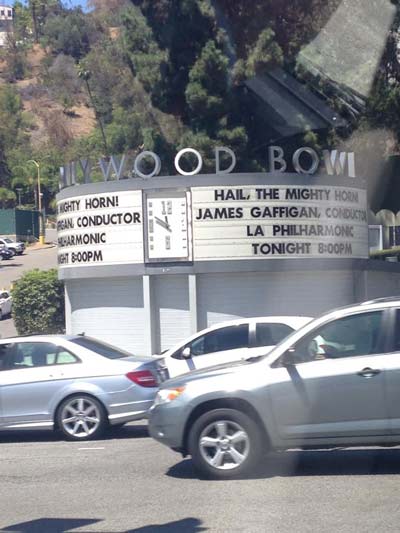 The IHS Symposium in Los Angeles was a marvelous experience. This year I was there as a member of the Advisory Council and not as a guest artist. So for me there was a lot of time to hear so many very interesting programs. Of course it was not possible to go to every recital or concert. So many very good players, too many to mention them all. For me it was so good to see again Yu-Ting Su; for me: Tina Su. She was a student during my first master class in Taiwan in 1992. Very gifted already and now she brought a new CD called Watercolors. She played a very good recital with several pieces of this album. Great to see somebody after 23 years, doing so well. Some concerts I have to mention and really were highlights of the symposium. The concert with Arkady Shilkloper, Stefan de Level Jezierski, and the fantastic Big Band of Gordon Goodwin. Such a great pleasure to hear the horn in another way than we hear it normally. Then the tribute to the Los Angeles Horn Club at the Los Angeles Theatre. To hear James Thatcher during this great concert was a very special gift. The concert at the Hollywood Bowl with the Schumann Konzertstück, played by Stefan Dohr, Andrew Bain, Tim Jones, and Sarah Willis was an outstanding performance. Andrew, who organised the symposium together with Annie Bosler, did also a great job in the same program with Till Eulenspiegel of Richard Strauss. Besides many great artists like Julie Landsman and Jennifer Montone, I was very impressed by the horn quartet of the Berlin Philharmonic. Stefan Dohr, Andrej Žust, Stefan de Level Jezierski, and Sarah Willis played two great concerts. I was impressed that they came as a quartet to LA after a very busy year with the Berlin Philharmonic. A great chance once in a life time for many of the visitors to hear this beautiful ensemble – thank you Stefan, Andrej, Stefan, and Sarah. Last but not least, thanks to Annie and Andrew who did an incredible lot of work and organising for this great workshop. You can be sure, Annie and Andrew, that everyone who was there will never forget this event, which the two of you made possible for all of us.
Ab Koster
Hamburg, August 27, 2015

The highlight to me, because of the venue and the atmosphere, was the concert in the Hollywood Bowl, For a Welshman to experience all that, following what I knew of the work that Alf Brain did there was amazing. On the recital side, the playing of Stefan Dohr was amazing, and also that of Andrej Žust (this guy is some player – good musician too). Sara was great, solid, and dependable on fourth. I know I have “gone“ for the BPO, but this time they were outstanding, better than the London performances. I will not associate “Nessun Dorma”any more with Pavarotti, but with the last “scream” of Stefan Jezierski. Ha, Ha. I didn’t go much into the area of mouthpieces and exhibits. The work that Annie had put in was amazing. I know Bain was in the title, but the day to day running was totally down to Annie, and she was superb. The Colburn was a blessing – we had everything on one site, everything was so close and convenient (well, except the Hollywood Bowl, Japanese Cultural Center, and Los Angeles Theater). I don’t know why they had to go to other theatres (apart from the Bowl) when they had the Colburn Halls? It is going to be, in total, one hell of a Symposiun to follow. Said enough now. Ha – Ha.
Sincerely,
L8 (Leighton Jones)

IHSLA was fanatastic! It was so great I didn’t get to see anything I wanted to do while I was there! I had a very ambitious program of seeing the beach, the Walk of Fame, Beverly Hills and maybe the desert close by. Instead, I spent my whole days listening to great horn playing, new pieces, old pieces played in a new way, great talks, ideas that changed my approach to teaching and playing, concerts of awesome bands, orchestras, chamber music groups and just horn players. But above all, I found a united community of people who share the same love as I do for the magnificent sound of a musical instrument! I just can’t wait for next year!!!
Best wishes,
Louis-Philippe Marsolais