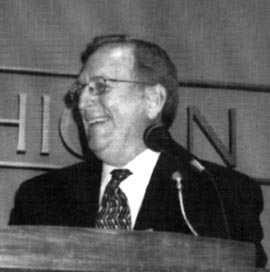 Eugene (Gene) Wade was principal horn of the Detroit Symphony Orchestra (1972-2001) and a music educator with many successful students.

Gene grew up on a wheat farm in Wellington KS. He credits his early upbringing on the farm for teaching him the value of hard work. He began piano lessons with his mother in first grade and moved to horn in eighth grade, studying with Leo Ashcraft in the next town. He listened to symphony orchestras on the radio, and once a month his family traveled 35 miles to Wichita to hear the symphony.

Gene was given the Punto award at the 2001 symposium at Kalamazoo MI. A profile appears in the August 2001 issue of The Horn Call.