Jonathan Boen, Principal Horn with The Lyric Opera of Chicago, Grant Park and Music of the Baroque orchestras has joined the roster of Featured Artists for the 45th International Horn Symposium, to be held July 29 - August 3, 2013 in Memphis, Tennessee, USA. 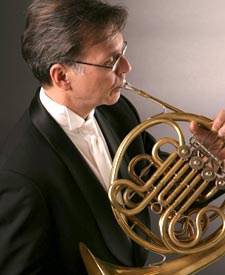 Widely recognized as one of the most technically proficient players, his experience at the opera adds a layer of soaring lyricism to his interpretations not commonly found in performances today. As a guest section leader for the Dallas Symphony, recent critical acclaim from Paul Robison hails Mr. Boen : "...the horn section never sounded better. The playing of each of the five was virtually flawless. There were no cracked notes...this was some of the most glorious horn ensemble playing I have ever heard. There was power but there was also one perfectly-tuned chord after another, and the horn sound was golden and pure." Gregory Sullivan Isaacs asserts: "Special kudos have to go to the horn section under the leadership of guest principal Jonathan Boen...and special gold star must go to the horn trio that accompanied Leonora's big aria 'Abscheulicher!' It has rarely, if ever, been better played."

In high demand as both a recitalist and orchestral soloist, Jon is known for his performances of works by J.S. Bach, Beethoven, Lennox Berkeley, Brahms, Britten, Cherubini, Handel, Martinu, W.A. and Leopold Mozart, Poulenc, Schumann, Scriabin, Strauss, Telemann and Vivaldi.

To critical acclaim, he premiered Jan Bach's Horn Concerto in 1983, a work written for him by the renowned Illinois composer. In 2004, Mr. Boen revived the concerto in a historic performance and recording with the Chicago Philharmonic under the direction of Maestro Larry Rachleff, now available on CD.

Much in demand as a recording artist, Jon has been heard in multiple live WFMT Chicago radio broadcasts by the Lyric Opera, Grant Park and Music of the Baroque orchestras. He has been active in Chicago's commercial recording studios, having taped more than 1,000 jingles for radio and television programs airing nationwide. Jon also was a featured guest on the Studs Terkel program in 1983.

After 27 years of teaching horn at DePaul University, Mr. Boen is pleased to be joining the faculty at Northwestern University.