London Symphony member Angela Barnes will be a Featured Artist at the 45th International Horn Symposium, to be held July 29 - August 3, 2013 in Memphis, Tennessee. 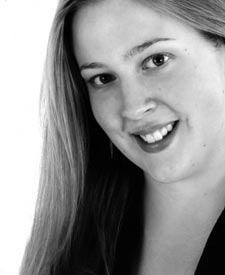 In January 2005, at the age of 21, Angela Barnes was appointed second horn of the London Symphony Orchestra, becoming the first female member of the orchestra’s brass section in the orchestra’s hundred-year history. She has worked regularly with most of the major British orchestras, appearing as a guest principal with the London Philharmonic Orchestra, the Royal Philharmonic Orchestra, the City of Birmingham Symphony Orchestra, and the Royal Liverpool Philharmonic Orchestra. Her career combines orchestral, solo and chamber music playing. As well as featuring in the second instalment of the Cala Records ‘‘London Horn Sound’’ series, she has also recently recorded Britten’s Canticle for Tenor, Horn and Piano, with tenor Allan Clayton, as part of the BBC Radio 3 New Generation Artists scheme.

Angela, from Rossendale, Lancashire, began horn lessons with her mother at the age of eight, before entering Chetham’s School of Music, Manchester, in 1994 to study with Elizabeth Davis. She then went on to study with Hugh Seenan, Richard Bissill, Jeff Bryant and Jonathan Lipton at the Guildhall School of Music and Drama in London, from where she graduated with a First Class Honours degree in July 2005. Angela has given numerous solo and chamber music performances, and was a member of both the National Youth Orchestra and the European Union Youth Orchestra. In 2002, she won both the Liverpool Young Musician competition and the Brass section of the BBC Young Musician of the Year competition, which saw her perform Richard Strauss’ Second Horn Concerto with the BBC Symphony Orchestra in the Barbican Hall, London, as part of the Concerto Final, which was broadcast live on BBC television and radio.

Highlights of recent seasons include performances of Schumann’s Konzertstuck for Four Horns and orchestra with the BBC Philharmonic in Manchester’s Bridgewater Hall, and of Brahms’ Horn Trio with pianist Martin Roscoe and violinist Nicholas Wright as part of the Ribble Valley International Piano Week.