Italian Danilo Stagni, Principal Horn of  Teatro la Scala and the Filarmonica Della Scala will be a Featured Artist at the 45th International Horn Symposium. 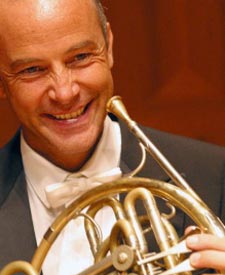 At just 16 years of age Stagni was selected by Claudio Abbado to become first horn player in the orchestra of Teatro la Scala, a position he continues to hold. From 1979-1980, again under Abbado´s direction, Stagni gained the position of first horn in the European Community Youth Orchestra. During this time he won various international awards, including the GB Viotti Prize (1978), the F.G Verganti Prize in Stresa and the  International Competition for Wind Instruments in Ancona (1979), among others.

From 1981 he has challenged both lyrical and symphonic repertory under such prestigious conductors as Carlos Kleiber, Leonard Bernstein, Seiji Ozawa, Georg Solti, Wolfgang Sawallisch,Carlo Maria Giulini and Valery Gergiev.

Under Giulini´s baton he participated in the recording of the complete cycle of Beethoven symphonies and with Chailly, two unedited Rossini cantatas with horn obbligato. In the course of the 2002 concert season of the Filarmonica Della Scala, Stagni performed the Britten Serenade for Horn,Tenor and Strings under the direction of Sir Jeffrey Tate which was filmed and recorded by Mediaset. With Riccardo Muti conducting La Filarmonica della Scala, he performed the horn obbligato of the the Bach B minor Mass.

On various occasions Stagni has performed the Mozart horn concertos at Teatro La Scala with the Orchestra dell´Accademia, some of whose members he has taught since 2000. He has recorded the Haydn horn concertos with Italian Swiss Radio Orchestra. He has held masterclasses both in Italy and Japan (Ashikaga University and the Sapporo Summer Festival).

From 2008 he is working as guest solo horn with Berlin Staatskapelle under D.Baremboin direction .