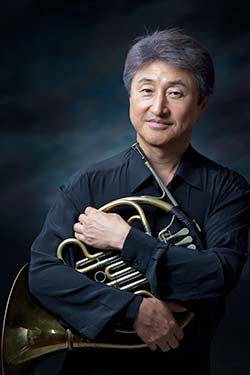 In order to introduce “Horn Playing in Korea” to IHS families throughout the world, I returned to my earliest memories of when I started playing the horn.

In 1972, when I was in third year of Junior High, I rented my first horn, which was a Conn that had many holes covered by tape, and I remember trying to make a sound on it. Later in High School, I bought an old Conn 8D and practiced on it. Then, in college, I had the good fortune to buy an Alexander 103. Everyone was envious – all my colleagues wanted to try my new horn.

During my school years, there were two orchestras in Seoul: the Seoul Philharmonic and the National Symphony, and they played very few concerts. Rarely did foreign orchestras perform in Korea. I still remember two concerts that had a big musical influence on me – the Vienna Philharmonic Orchestra and the Berlin Philharmonic Octet.

In 1977, when I was a sophomore in college, the Sejong Cultural Center, one of the largest concert halls in Seoul, was built. Celebratory concerts were held every day for almost two months. Various orchestras, opera companies, wind ensembles, and renowned soloists from all over the world performed there – it was a very good experience for me. Concerts by the Philadelphia Orchestra and Eastman Wind Ensemble influenced me so much that I received my Master’s degree from Temple University, studying with professors Mason Jones, Daniel Williams, Randy Gardner, and Joe de Angelis. Then I earned my Doctoral degree at the Eastman School of Music, studying with professor Verne Reynolds.

When I returned to Korea in 1990, I joined KBS Symphony Orchestra as the associate principal, and I began my career as a professor at the Seoul National University in 1994. I tried to invite renowned horn players and wind players as often as possible to provide my students with diverse master classes. I believe these experiences played a significant role in enhancing my student’s education and developing the wind sections of the Korean orchestras.

My students’ participation in 1995 Yamagata and 2000 Beijing IHS Symposiums were also positive influences, and one of them even won second place in the Philip Farkas competition.

Now there are over 40 orchestras in Korea and an Orchestra Festival is held annually at the Seoul Arts Center. Some of the popular repertory performed there includes works by R. Strauss, Mahler, Bruckner, Wagner, and Stravinsky. I would like to believe that this exposure has resulted in the huge growth of the Korean horn sections.

Here are links to the performances of Beethoven Egmont Overture, arranged by Alan Civil, and Tico Tico performed by Frank Lloyd and SukJoon Lee with the KHS Horn Ensemble at the 2013 Korea International Music Festival.