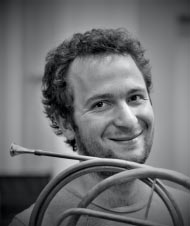 About four years ago, I got the offer and invitation to record a CD. I quickly realized that I wanted to contribute a recording of rare repertoire by unknown composers who aren’t recognized enough today, and which would be interesting for the horn community. I already knew about Louis-François Dauprat’s sextet and his method book, but while researching his life and musical career, I read about his other works and found most of the manuscripts in the Bibliothèque Nationale de France. After lots of researching, editing, rehearsing, and recording, finally, in December 2021, our CD Dauprat: Music for Horn was released. Covid gave us some trouble as we had to postpone our recording session several times, but eventually we managed to finalize our work. So, I am now very pleased to present the CD to the International Horn Society.

At this point, I want to give special thanks to my dear colleagues and friends Wolfgang Brunner, Erik Košak, Gabriel Stiehler, and Markus Hauser, not only for their wonderful playing but also for their encouraging and inspiring contribution to this adventurous project. We were extremely fortunate to be able to perform on an original horn by Lucien Joseph Raoux (circa 1817) and on copies according to Lausmann and Raoux, replicated by Andreas Jungwirth. These were the perfect instruments for the project as Dauprat himself won a cor solo made by Raoux as the Premier Prix at the Paris Conservatoire in 1797. This very instrument is currently on display in the Musée de la Musique in Paris. Later, he also worked with the Raoux family to further develop the horn. Also for our recording, Wolfgang Brunner played on a fortepiano after Conrad Graf (circa 1830), replicated by Robert Brown.

Unfortunately the works for horn by Louis-François Dauprat are almost completely forgotten today. In my point of view, they are jewels of chamber music of the time, not only because of their enormous virtuosity but especially because of the cantabile in the horn parts. His works also cover a very important time in the development of the horn. His writing for horns contains many chromatic lines, unusual for the era; and the works for horns using different crooks are particularly interesting. This is still unusual today but very exciting, mostly in terms of sound. I have re-edited most of the scores and they will be released soon.

Louis-François Dauprat can be seen as the pioneer of the Parisian horn tradition. His compositions move stylistically between the classical and romantic periods. In addition to operas and symphonies, he composed an entire series of works for solo horns: horn duets, horn trios, horn quartets, horn sextets, horn with string quartet, and many more. For horn players, and for understanding the interpretation of works by Dauprat and his contemporaries, the Méthode de cor alto et cor basse (Paris, 1824) is particularly significant. Its 47 articles, 12 studies, and over 700 exercises illuminate a wide range of pedagogical topics. No comparable work to this extent and of this detailed description was ever written before or for some time after the publication of Dauprat’s Method. Thus, it surely occupies a special position in the development of pedagogy. Before Dauprat, the horn schools mainly described the technical aspects of horn playing. Dauprat, on the other hand, describes in his method all aspects of technical and musical natural horn playing (divided into high and low horn) and, in addition, there are hints for composers and teachers. Above all, the sound aesthetics of the different crooks, the nearly fully-chromatic way of playing with the help of hand technique, ornamentation ideas, and performance tips are explained. Dauprat pushed the virtuosity of horn playing to a level that had been unrivalled until then. This is particularly pronounced in the works for horn and piano (Solo de Cor op.11, no.3, and Sonata op.2), as well as the Duet (op.13, no.6). In addition to its sonata form, the key of F major and the powerful opening motif, Dauprat’s Sonata op.2 bears another similarity to the very well-known horn sonata by Beethoven (1800, op.17): the piano part is also very virtuosic, employed as an equal partner in the musical interplay. In addition, the horn does not play with the crook in the key of the work, as was usually the case until then, but often in other keys. In the Solo de Cor (op.16, no.2), for example, it uses an E crook but never plays in the key of E major itself. The opening andante theme is in A major (notated F major) as is the following minor section in A minor (notated F minor). This was possible due to the excellent natural horn technique which reached its zenith at the time. The different muted or open tones also produce very different timbres, which disappear completely on the valve horn. Dauprat demands adventurous combinations in the Duets for Two Horns (op.14) and the Quartets for Four Horns (op.8). From the latter, we find in Quartet no.1 in G minor and G major that the 1st horn plays in G, the 2nd horn in F, the 3rd horn in E-flat and E, and the 4th horn in C. This poses particular challenges for the players, but also gives the work a very special charm.

We had great fun preparing this repertoire, and we hope that it encourages many fellow horn players to discover these works, the natural horn, and, more generally, this great era of horn playing and composition in France.

David Fliri studied at the Mozarteum Salzburg and at the Hochschule Franz Liszt in Weimar. He has performed as solo horn in various ensembles, including the Mozarteum Orchestra, the Junge Deutsche Philharmonie, the Gustav Mahler Academy, the Camerata Salzburg and the Staatskapelle Weimar. As a soloist, he has played with orchestras across Europe and abroad on both natural and modern horn, performing concertos by Telemann, Mozart, Strauss, and many others. https://davidfliri.com