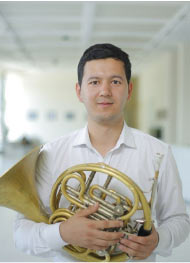 In Uzbekistan, culture and art are becoming more and more a part of everyday life in a diverse society. The cultivation of interest towards classical music is evident in Tashkent, the capital of Uzbekistan, where many orchestras give regular concerts. Every weekend, you may hear concerts presented by symphony orchestras, chamber orchestras, military brass bands, or opera companies.

Such a vibrant concert culture creates a demand for horn players capable of performing musical masterpieces of different eras and genres. Accordingly, there are many music schools in Uzbekistan where students learn the basics of music from an early age. Most music schools in Uzbekistan were founded during the second half of 20th century, beginning during the Second World War, as many Soviet professors migrated east, including several music teachers who eventually would raise the next generation of musicians in Uzbekistan.

The early center of brass players was the R.S.M.A.L.N.G.U. (locally called “Petrovka”) which had a program only for wind instruments included in the military band. The school provided housing in a dormitory, and most students there were talented children who were left orphaned after the war. In later years, potential students were taken directly from orphanages to provide them with better shelter along with education and musical training. Many of those orphan children would eventually become successful musicians and teachers themselves—including my primary horn teacher, Mirjon Mardonovich.

The three of these men not only provided valuable horn lessons but also conducted wind bands and orchestras in Tashkent. Their teaching styles were focused on achieving a singing and warm sound produced free of unnecessary tension. Radik Safarov was one of the well-known students of these horn teachers who continued this direction of focusing on beautiful sound qualities and a cantabile singing style. He taught at the R.S.M.A.L.N.G.U. and the Tashkent Conservatory from the 1970s—90s as well as performing in the National Symphony Orchestra.

At the same time, starting in the 1970s, other music schools in Uzbekistan began developing their wind programs, and many graduates from the R.S.M.A.L.N.G.U. school were employed as their teachers, including Yusuf Niyazov and Mirjon Mardonovich. The former started teaching in the Glière music school and later in the Uspensky music school from the 1980s to the present.  Both are also faculty horn teachers at the State Conservatory of Uzbekistan.

Why Uzbekistan music schools are named after Reinhold Glière (1967) and Viktor Alexandrovich Uspensky (1949): Both renowned composers contributed to the preservation of Uzbek folklore by means of transcription of oral traditions into standard notation, as well as teaching composition to the Uzbek musicians and composing music for operas which depict traditional Uzbek stories and tales.

To maintain motivation among music students in Uzbekistan, there are two main regional competitions. San'at g'unchalari for the primary through secondary school students, and the Regional Competition of Talented Musicians for high school students where first place in the competition entitles the winner to free education at the State Conservatory of Uzbekistan.

The Conservatory of Uzbekistan provides undergraduate, graduate, and doctoral programs. Founded in 1936, it occupies an important place in the music education and the cultural life of the country. Regularly hosting many concerts, the Conservatory stage provides the platform for young musicians to develop performing skills. After graduating from the conservatory, many orchestral musicians start working as artists in symphony or opera orchestras, teaching in a music school or a combination of these. It is also not uncommon that graduates from music schools and conservatories go abroad to study or work. Horn players from Uzbekistan can be heard in orchestras in Russia, China, and Malaysia.

Ongoing efforts are being made in Uzbekistan to foster interest in classical music, including the horn repertoire. In recent concert seasons, for example, one could hear from the stages of music halls horn concertos composed by Strauss, Glière, and Mozart performed by Uzbek hornists. In addition to concerts by local orchestras, Russian orchestras such as the Moscow Virtuosos, the Mariinsky Opera Orchestra, the St. Petersburg Philharmonic Orchestra, the Bolshoi Theatre, among many others, often tour through Tashkent. Such concerts are often accompanied by various meetings and master classes. Similarly, Uzbek orchestras regularly perform overseas. In recent years, they have visited Latvia, Kazakhstan, Russia, Georgia, Kuwait, The United States, United Arab Emirates, and South Korea.

Shahriyor Berdiyev was born in Uzbekistan in 1993. He graduated from the State Conservatory of Uzbekistan with his bachelor’s degree in Horn Performance in 2015 and his master’s degree in Horn Performance in 2019. He is currently second horn in the State Symphony Orchestra, horn teacher at the R.S.M.A.L.N.G.U., and conductor of the student wind orchestra at the Uspensky Music School.

Translated and edited by Amir Sharipov.