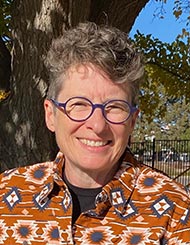 When I was eleven years old and about to enter sixth grade, the middle school band director came to visit my school. His job was to help students select an appropriate instrument for band class. I wanted to play the French horn, but my older brother was already playing horn and was first chair in the eighth grade band. Our parents would not allow me to play the horn because they didn’t want us competing against one another, so they said I had to choose a different instrument. My mother had a flute from her high school days and urged me to play that, but I did not want an instrument with so many keys. After a lot of back-and-forth discussion, my brother, in his eighth grade wisdom, suggested I play the bassoon because “you’ll always be first chair and never have to practice!” So, despite my flute trepidation, I took up an instrument with significantly more keys that was also much heavier to tote around. I often was first chair, but I did have to practice. I played bassoon through high school and for a year in college but quit after that. Since they were so expensive, I never had my own instrument, and did not play again for many years.

As I approached fifty, I prepared to retire from my career as an air traffic controller and searched for activities to occupy my time. I decided to take up playing bassoon once again. Craigslist offered up a nice, lightly-used Fox Renard bassoon which I purchased without playing (being too embarrassed to try it in front of its owner). I bought some reeds and a Weissenborn method book and started playing again. Fortunately, it came back more quickly than I expected, even after 30 or so years. I joined a community band—which was thrilled to have a bassoon player, and they did not require auditions.

Several years after retiring, I moved to a different city and joined a different band where I was once again the only bassoonist. As a small band, it had only a few of each instrument and no horns at all. Frequently, the conductor bemoaned the lack of horns and tried to cajole local horn players to join us. The band also played marching music, which usually has no bassoon part, so I pondered picking up a different instrument for those occasions. I toyed briefly with the trombone, but one day it occurred to me that I could buy a horn and learn to play. Again I perused the ads, this time on the International Horn Society classifieds, and after a little consultation with my brother (who by that time was a horn professor), I decided on a used Holton H179.

When the horn arrived, I found a teacher at a local music shop and began taking lessons at the age of fifty-six. I worked my way through Getchell’s First Book of Practical Studies for French Horn and, at the suggestion of a fellow student, joined a second local community band that didn’t require auditions. There, I joined several other horn newbies and was seventh horn. After a month or so in this band, I casually mentioned to the conductor in my first band that I was learning horn. She was very excited and encouraging, and before I knew it, I was playing horn in two bands. Meanwhile, in my lessons, I had moved on to a Kopprasch Studies book.

Playing music for two bands and keeping up with my lessons, I practiced at least two hours every day. My thumb developed a large lump where it joined my hand. To ease this, I purchased the hand strap my brother recommended. In February 2020, I played my first concert on horn. A newly-joined bassoonist had a family emergency, and this resulted in me playing both bassoon and horn for the concert. After the performance, as I helped to clean up, I lifted a table and realized that I could not lift my left arm higher than eye level. Just days later, the entire state—and therefore both bands—shut down due to the Covid-19 pandemic. With no band and no horn lessons, I stopped practicing as I realized that the position of the horn was either causing or exacerbating the pain in my shoulder. Three doctor visits resulted in a diagnosis of frozen shoulder. They gave me two very large shots of steroids in the joint, and I began visiting a physical therapist. I stopped playing both horn and bassoon, hunkered down to do PT, and waited for things to reopen. 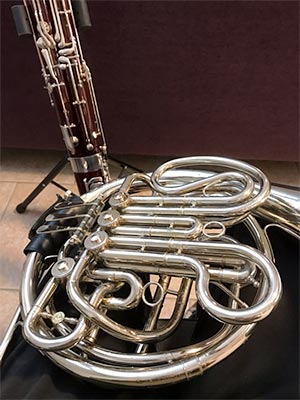 A year and a half later I had not played either instrument at all.

Then, my original band began to have rehearsals outside in a courtyard and I decided to play the bassoon, thinking it would not hurt my shoulder. As I practiced, I often played the band music along to YouTube videos to make it less boring. Hearing the horn parts in the songs made me melancholy for playing horn again, but I was nervous about losing the shoulder flexibility I had worked so hard to regain. As rehearsals continued, I decided I would try the horn again. I picked one song—ironically, a medley of tunes from the movie Frozen—and I asked the conductor if I could try to play the horn part on it. She happily agreed, and I began to practice the part, always followed up with my forty minute PT routine. By concert time, I had three horn parts and ten bassoon parts to play.

Now I am back to practicing mostly horn. I set a thirty-minute timer to ensure I do not practice too long, and I do my PT afterwards. Playing the horn brings me more joy than does the bassoon (even if I sound like a distressed cow sometimes). Being in small bands means that often I am the only person playing horn. It is not as easy to hide in the texture; but being older, I do not care nearly as much if my occasional wrong notes are heard. For me, it is all about the fun of being in band and making music with others, no matter how old I am.