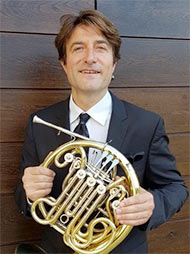 When starting to plan seriously to bring our most promising students to the highest level (I mean becoming world-class performers), there is an essential argument that is, to me, not considered often enough. In the chapter entitled Musicality in my book, Advanced Method for Horn (Phoenix Publications), I call it the problem of gravity.

As long as I have been teaching, listening in turn to etudes, excerpts, or concertos, I have noticed students over-playing a phrase or motif. Not satisfied with looking after their air or fingerings, horn players accompany the musical line with excessive physical movements. This lack of restraint can make the playing seem heavy and exaggerated. Despite their good intentions, this moves them away from what they wanted to convey musically. All the excess motion disturbs the flow of the music and indicates that they haven’t really got a clue what is happening with the phrase.

The bulk of our repertoire uses the two upper octaves (mid-range and high). If this is the default position in our minds, then everything below it ends up low in every sense of the word. If we play thinking upwards, as a singer would, it brings a lightness, ease, and brilliance to our playing, whereas playing to the bottom can be inelegant and can constitute an obstacle to music-making.

Such relaxation also keeps us listening to the intonation of the piano, with whom we frequently have a dialogue. An image comes to mind of the way gravity pulls an object downwards with the weight of the air above it. A first marker of progress can be to record oneself before attempting to correct something. This is always a good idea, as the recording asks us first to act then to critique.

But the best way to solve the sound-color problem caused by an excess of theatrics is to adopt the standard range as a technical recipe: not tinkering with the three standard octaves prevents the distortion of your sound. Returning to the analogy of gravity, atmospheric pressure convinces us that air pressure is the antidote to these curious anomalies.

My “war horse” is working on the difference in the registers, seeking to produce a unified tone color (which everyone seeks) without necessarily imagining the need to shift embouchures to accomplish this. To be more specific, teachers normally start out novice students with the idea of the horn having a lower and an upper register, each divided into two equal two-octave segments. Let’s not forget that most students first produce notes which are right in the middle of these four octaves.

To accomplish the necessary change of focus, my approach is as follows: find the most natural placement of the lips around low C (the last note in the opening solo of Till Eulenspiegel), and then manage the three octaves above that with continuous abdominal support.

Continuous abdominal support results in a high range with less mouthpiece pressure, bringing out a greater richness of sound, flexibility, and physical endurance. For the low register, from low C down to pedal C, only one change of position is then required.

Hervé Joulain performed with the Orchestre Philharmonique de Radio France from 1987 to 1997, then with the Orchestre National de France and the Orchestre de Paris under the direction of renowned conductors Zubin Metha, Daniel Barenboim, Seiji Ozawa, Kurt Mazur, Charles Dutoit, Riccardo Muti, and others. In the year 2000, he made his debut in the United States and Canada, performing Strauss and Mozart concertos with 110 different orchestras.

Since December 2002, Joulain has been solo horn in the Symphonica Toscanini (Italy), appointed to this position by Lorin Maazel. Recently, he performed with the New York Philharmo­nic, the Berlin Philharmonic, and the Royal Concertgebouw.

From 1994 to 1998, he was professor of horn at the Conservatoire National Supérieur in Paris. He has given over 40 master classes in France, Portugal, the Czech Republic, Canada, Brazil, Ireland, Spain, England, Finland, Italy, Luxembourg, and The Netherlands.