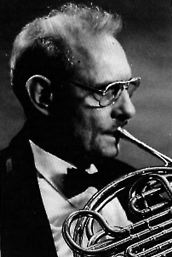 "Whether lasting through a Salome, pounding out a Long Call, backing up NBC script shows, or playing in Xavier Cugat's orchestra, Dick served his Art well. Loyal to his colleagues and dedicated to his students, Dick Moore demanded much of himself in maintaining the highest standards of teaching and performance."

Richard Moore studied with Lorenzo Sansone during his last year of high school. During his college years in Los Angeles, he studied with Georg Hofmann, played in a repertoire orchestra, and worked as an usher at the LA Philharmonic. "I was so interested in music that even though nobody had any money during the Depression, I'd go to a store that had miniature scores that were badly printed, seconds that were yellowed and old so they cost just pennies." He also worked summers at the Hollywood Bowl as a stage guard. He used the opportunities to listen to great musicians and learn from what he heard, marking the scores with his observations.

Moore returned to New York for graduate work at Juilliard, studying horn with Josef Franzl, his most influential teacher. He also took a few lessons with Anton Horner. He played in the National Training Orchestra. In 1936 he was offered his first professional contract as second horn with the Chautauqua Orchestra.

In quick succession, Moore played principal in the National Symphony, assistant first in Pittsburgh (where he spent his time practicing), then Radio City Music Hall and free-lance work in New York City. In 1940, he was accepted into the NBC Symphony, which included various other work such as brass band. A euphonium player in the brass band was also personnel manager of the Metropolitan Opera Orchestra, and he recommended Moore to the Met.

Even while playing full-time at the Met (1942-1985, principal 1942-1964), Moore continued to free-lance and play television shows. He was justifiably proud of his accomplishments with the Met, especially the recordings of Humperdink's Hansel and Gretel (1947, no splicing), Mozart's Cosi Fan Tutti (with Stiedry), and Strauss's Salome (with Welitch and Reiner). He appreciated working beside Gunther Schuller at the Met. "I was lucky to have such a sensitive musician who knew the scores that completely as a colleague." He felt that much musicality was lost in later years as horn players seemed concerned with playing higher, louder, faster. "Today we are getting players who are far better instrumentally prepared, better technicians, but not musically prepared."

Moore taught for 22 years at the Manhattan School of Music. He wrote methods (A French Horn Primer and French Horn Method I & II), a warm-up book (Master Horn Warm-up and Flexibility Studies), Operatic French Horn Passages, and Anthology of French Horn Music (excerpts with detailed comments, published in 1993). He was a demanding but inspiring teacher. He listened to live and recorded music, especially of singers, and studied scores to know what everyone else was playing, and he recommended such studies to his students. "I'd study how singers phrased things, especially in opera, since I often played the same phrase with them before, during, or after they sang it."

Moore was elected an IHS Honorary Member in 1987. A tribute on the occasion of his retirement from the Met appears in the April 1986 issue of The Horn Call, and another, after his death, in the April 1989 issue.